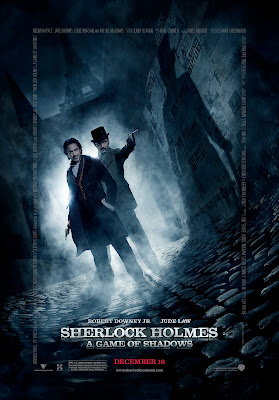 As the movie begins we discover that the game is well and truly afoot, Holmes (played by the suave and debonair Robert Downey Jr) is deeply lost in many months of investigation and research into seemingly random events. No one sees the threads that connect these events, no one except the great Sherlock Holmes that is. He discovers one factor within the centre of this web of death, destruction and deceit - Professor James Moriarty (Jared Harris).
Watson (the tache-tastic Jude Law) is about to be married and Holmes manages to divert his stag-do so he can investigate further into the mysterious goings on. During this we encounter the gypsy Simza, played by Noomi Rapace. Simza along with the other female characters in the movie are unfortunately completely overshadowed by the bromance between Holmes and Watson. The chemistry of Robert Downey Jr and Jude Law onscreen cements your belief that these to characters can co-exist. Yes just like Depp in the Pirates movies we may be veering into becoming a caricature but hey it doesn’t matter, at least its an entertaining one!
Now that Watson’s honeymoon has been rudely interrupted, he once more finds himself drawn into the fray in order to assist Holmes. Moriartys tangled web leads them on a chase across europe to track down the infamous professor and crack his master plan. I particularly liked the escape sequence through a forest as the full arsenal of a recently infiltrated weapons factory is unleashed upon them. The cinematography used in this scene particularly is outstanding, slow motion shots of trees exploding all around them. Additionally a slightly disorienting effect was used where the character focused on is in slow motion but the background flashes past at high speed, this definitely added to the feeling of chaos.
The professors plan is to create a war between multiple countries so he can increase the demand for arsenal and increase his wealth by being both the creator and suppler of those weapons. Harris plays Moriarty brilliantly his silent menace hiding in the shadows but as his battle of wits with Holmes continues his malice becomes more apparent. I love how both Holmes and Moriarty respect each others intellect but not their beliefs much like many other well portrayed antagonists (Magneto/Xavier, Obi-Wan/Anakin. The Doctor/The Master).
Stephen Fry also puts in a very funny turn as Sherlock's older brother, Mycroft Holmes. He does tend to just play his over eccentric self, maybe slightly channelling Oscar Wilde while displaying more of himself than I can bet you have ever seen before.
As the movie starts to come to its climax, Holmes and Moriarty are stuck in their tête-à-tête on Reichenbach Falls, all the while Watson has to prove that some of his partners skills of deduction have rubbed off and save the day. Its definitely not a true adaptation of Sir Arthur Conan Doyle’s original work but it does have action shoot outs, martial arts and witty lines while being bigger and better than Guy Ritchie’s 2009 original. Stylish, funny and highly entertaining.

* Written and Enjoyed by Stefan Harkins at 2:54 pm No comments:

* Written and Enjoyed by Stefan Harkins at 1:45 pm No comments:

One night, three guys, a hell of a lot of pizza and rum....oh yeah and did I mention the zombie hordes??

Myself, Robert Barton-Ancliffe (who also creates the watcher blogs for Proud Lion) and of course the proprietor of Proud Lion himself Mr Ben Fardon all got together to get in the flesh eating mood ready for the 2nd season of The Walking Dead TV series.

What happened that night was recorded and then documented ...

* Written and Enjoyed by Stefan Harkins at 12:47 pm No comments: