Here are my next couple of articles which I have written and enjoyed for my favourite comic book store - http://www.proudlion.co.uk/

Please check them out!

We start with a very Eighties-style text introduction along with a short premise; Kevin Flynn has turned his experiences inside the Grid into a popular videogame – Tron. But at the height of his fame and power as head of Encom, he disappears which leaves his son Sam to grow up all alone.
http://proudlioncomics.blogspot.com/2010/12/watcher-tron-legacy-23-minute-preview.html 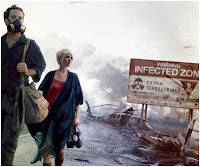 Monsters Movie Review.
The basis of the movie is that a NASA space probe has crash landed in America bringing with it alien life forms. Six years later there is a massive section of land between the United States and Mexico sectioned off as ‘infected’. We have giant squid-like creatures roaming the land and the armed forces trying to stop them doing damage, but as always causing some themselves.
http://proudlioncomics.blogspot.com/2010/12/watcher-monsters.html

* Written and Enjoyed by Stefan Harkins at 7:17 pm